Do we still need organizations?

This is a recurring question in these turbulent, frightening times. The organization is becoming a redundant “connector” between you and the world. Infrastructure is all you need. But that infrastructure is far too large for one person to build up – it’s better to let a data machine do it. In the past decades, production was the number one central factor. Business and services were organized around this central pillar.

Nowadays, (big) data science and data warehouses are commonplace. Data, when used intelligently, can lead to greater knowledge, and knowledge is, of course, power. If you combine this insight with the trend of owning things making way for having access to services, you can see that subscriptions and membership services can be viable everywhere. You can have a data subscription to water, the weather, or the outflow of employees. A one-man company can easily offer these services without the backing of a major corporation.

A subscription to various data logs from the internet of things is a new form of membership that requires fewer companies and people. Do you have a passion to do something about the outflow of people? Take out a data subscription and develop a smart service or a valuable proposition around it.

Once the infrastructure is in place, you can do the things you want to better and more often. Consider the definition of an organization: a place where people work together to achieve goals and chase their passion. In more and more cases, you don’t need an organization to do that. An internet connection, a device that connects to it, and a valuable database are the data science tools for the modern worker in the 21st century.

From chain to network

We could greatly improve healthcare if it was connected to the community, turning healthcare into something coordinated by the network. We’re moving from chain to network (Van de Wiel, 2009). In some places, AEDs (Automatic External Defibrillators) are placed in publicly accessible places so that regular people can use them in case of an emergency. In a grid of 6,500 volunteers, one of them will almost always be able to reach the scene of the crisis before an ambulance. This is how we can move from chain healthcare to community care, or network care.

Using data to generate smart temporary routes in the network makes the network function better and faster than the predetermined routes used by the chain partners.

Estimating the type of care required earlier in the process saves time and money, so that hospital-quality care can be provided outside of the hospital. Healthcare will be provided not just by the healthcare provider, but also outside of it.

Similarly, the core services of a bank are no longer provided by the bank itself, but outside of it. This trend is affecting more and more industries.

From simulating to dismantling the organization

A simulator is a powerful tool. Once you’ve built a simulator, you can start dismantling the company itself, especially if the software package is scaleable. Of course, it’s a lot harder to develop a complete business model than to come up with ten important numbers. But the possibility of running a simulation all day has a lot of value. It can render an entire marketing department or management with molasses-like decision-making redundant.

Once you use A/B tests in the simulator just like Google or Spotify, you can embed the simulator as a testing layer in the primary process. The simulated environment and the live online environment will then end up in a blended learning environment. Within a short amount of time the simulator will become an online service where the machine decides which algorithm, where, and when, can best achieve a higher conversion rate and clickthrough rate.

An A/B test is a good example of this in microcosm. Instead of letting the simulator, offline, calculate two scenarios with a lot of uncertainties regarding consumer behavior, you can divide the customer database in two (or more) parts and run both algorithms simultaneously. From simultaneously running behind the scenes to simultaneously running in an online environment.

Robots are becoming employees of the month

From the moment that the machine learning modules have been sufficiently developed, the software itself can determine which algorithm will deliver the best results in which situation. The algorithm can start to take over much of the work. One algorithm can replace 100 reports! The system will become part of your staff, the robot employee of the month.

You use the data to plug into the network. Take, for example, traffic: a cellphone provider can use phone signals to detect traffic jams (immobile phone signals), where traffic is slow, and where conditions are nominal. All of this based just on phone signals. This is smart use of data that says something about the network. Whether you visualize that data or not, the network (all those moving signals) is there. The question is how to leverage it effectively using measurements, advice, etc.

Data-driven working radically negates the monopoly on knowledge and learning. Connecting people to the data creates a real-time learning effect, no further motivation required. The same goes for interventions from outside.

Once the (data) infrastructure is in place, there aren’t many costs left. Rifkin (2014) calls this concept the Zero Marginal Cost Society. He describes how the Internet of Things is leading to more and more free goods and services: from mass production to production by the masses. MOOCs (Massive Online Open Courses) are creating Zero Marginal Cost Education. Even electricity is democratizing. We’re getting closer to the so-called Collaborative Commons.

Give control back to the people. We have the tools and the technology. If we don’t, people will take control back themselves. That will mean the bankruptcy of many traditional organizations. Data-driven working is the future, and the future is here. Do you also want to become a customer of ours? We are happy to help you with the rise of data-driven services (redundant organizations) or other things that will make you smarter. 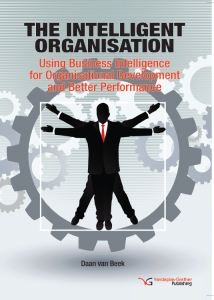